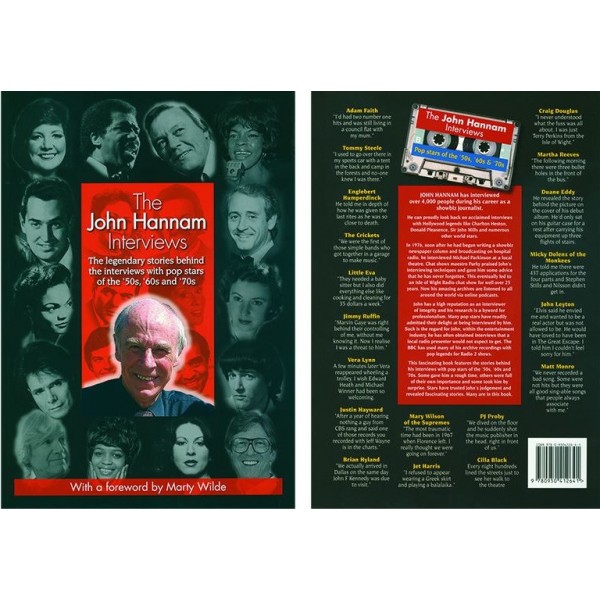 This copy of the book has a small reduction due to a minor label mark/discolouring on the barcode on the back. Please see the image.
This large glossy softback book contains an interview per page including interviews with Jet Harris, Hank Marvin, Marty Wilde, Joe Brown, Duane Eddy and The Crickets to mention a few. Marty Wilde has written the foreword for this book. A nice easy book to pick up and put down.

John Hannam has been interested in showbusiness and the theatre since the early 50s, when he first discovered Variety, at the Theatre Royal, Portsmouth. That love for the stage and its performers has never been lost. His enthusiasm for the business is as vibrant as ever. He also loves meeting people from all walks of life.

John began writing on showbusiness for local papers on the Isle of Wight, back in the late 50s. By the 70s he had a regular Stage Talk column in the Isle of Wight Weekly Post. He has written for The Stage for nearly 40 years.

In 2010 Desmond Carrington used some of John’s rare interviews with Matt Monro, Anne Shelton and Malcolm Vaughan on his Radio 2 shows.

Over the years John has built up a trust and understanding amongst stars, agents, press officers and managements. Those who will readily vouch for him include John Woodvine, Tom O’Connor, Marti Webb, Don Black, Les Reed, Elkie Brooks, Nick Thomas and Roy Hudd. This is his 40th year of interviewing famous people

John chooses his own guests and only interviews them because he really wants to – and not because of a programme controller or features editor. He has strong feelings about private lives being aired in public. He has never worked this way and all his interviews are on a professional-life basis. They are also all in-person.

His first book was I Was A Stage Door Johnny, with a foreword by Bob Monkhouse. His new 2016 book called The John Hannam Interviews, with a Marty Wilde foreword, features the stories of his interviews with pop stars of the 50s, 60s and 70s. Over the past forty years John has interviewed over 4000 famous people.