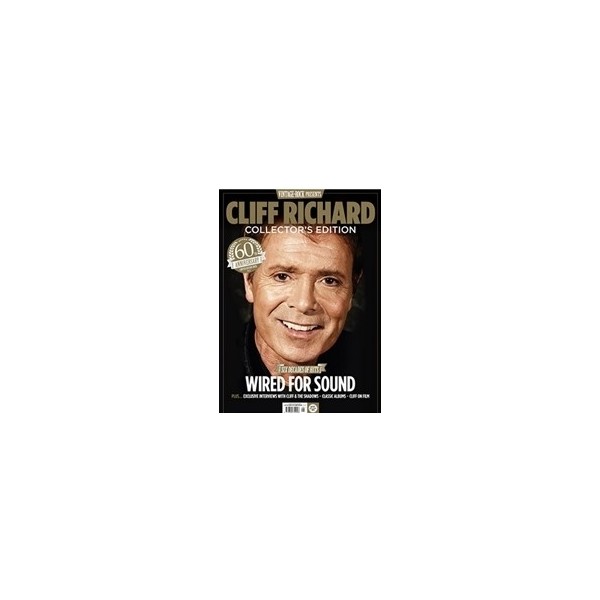 Out Of Stock
Please note slight damage to cover.

It could be a small tear or scratch marks.

This magazine is packed with images and information on Cliff including interviews with Hank, Bruce and Brian. More images to follow.

In this latest special anniversary edition we celebrate 60 years since Cliff Richard & The Shadows first landed with his earth-shaking debut single 'Move It', considered by many to be the UK's first bona fide rock'n'roll song.

Inside, we score a wealth of insider knowledge via in-depth interviews with three of the remaining members of the Shadows – Hank Marvin, Bruce Welch and Brian Bennett – who discuss their formation, their rise to rock'n'roll fame and on to later triumphs.

Cliff is the only artist to have had a UK No. 1 single in five consecutive decades, has had more UK Top 20 hits than any other artist, and is second only to Elvis for UK top tens – lest we forget his overflowing awards cabinet! Here, we pay tribute to a true superstar and a national treasure.

Over 132 pages, we track Cliff's momentous career from his birth in India and modest upbringing in the Hertfordshire suburbs, through to meeting his band, early rock'n'roll stardom and his light-speed ascent to massive mainstream success.

We then follow Cliff's upward trajectory through the decades as he took on the mainstream with hit parade favourites such as 'Please Don't Tease', 'I Love You', 'Devil Woman' and 'We Don't Talk Anymore' in the '60s and '70s, and on through his – barely interrupted – succession of top ten albums that continues right up to the present day.

We keep things further up to date via a chat with Richard's producer Steve Mandile, who discusses those recent successes, shares his insight on the singer's return to rock'n'roll and adds colour to Cliff's highly productive later years.

Elsewhere, we spotlight his many classic albums from across the decades including 'Cliff', '21 Today', 'Nearly Famous', 'Always Guaranteed', 'The Album', 'Reunited' with The Shadows, plus his latest delivery, 'Just… Fabulous Rock'n'Roll'. In our Top 40 rundown, we survey what is an incredible record-breaking catalogue – from signature songs to lesser-spun gems, we take a seat at the cinema to explore his big-screen portfolio, plus we delve into the best – and rarest – of his vinyl output.

These magazines have black shiny covers which can show up slight scratches or scuffs.