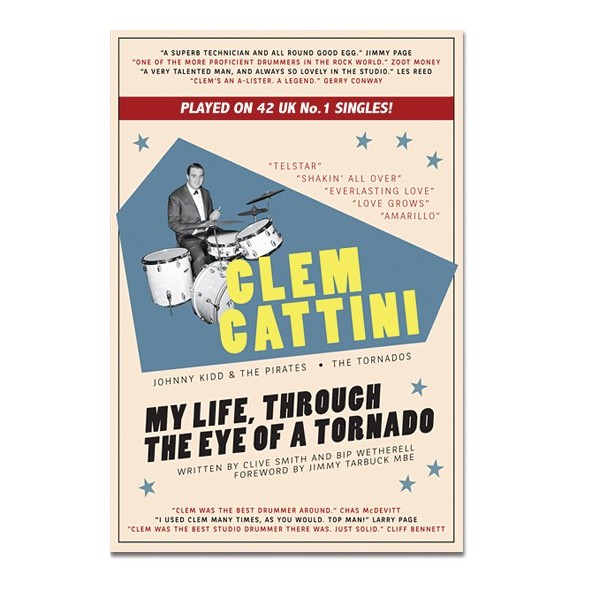 CLEM CATTINI : MY LIFE THROUGH THE EYE OF A TORNADO - BOOK

I am sure most of you are more than aware that Clem is a much loved prolific drummer who has been involved in the music scene for many years, either with the Tornados etc or as a session guy. While on the scene Clem has become close friends with Brian Bennett and as such there are some great anecdotes and information in here courtesy of Bruce Welch and Brian Bennett who were interviewed for book. I have tried to show how much content there is on Cliff and The Shadows with the last two images.

Clem Cattini is the legendary drummer whose career spans over 60 years, beginning in the mid-1950s with Terry Kennedy's Rock and Rollers who played gigs across London, most notably at the 2i's Coffee Bar in Soho, before the band were asked to join up with Terry Dene for a nationwide tour. In 1960 Clem teamed up with Johnny Kidd and The Pirates, resulting in the classic recording of arguably Britain’s greatest rock and roll record, Shakin’ All Over.

Following on from the Johnny Kidd days, Clem became involved with maverick record producer Joe Meek. Needing a band to record demos in his Holloway Road ‘studio’, in reality the upstairs of a shop, The Tornados were formed, which led to the recording of the worldwide hit Telstar, the first British record to reach the number one spot in the American Billboard charts in 1963. (In the 2008 film of the same name, Clem was played by James Corden.) Tours backing Billy Fury followed, before Clem decided to call a halt to the incessant touring in 1965.

When an opportunity arose to play studio sessions, meaning he could still enjoy playing music without the hassles of being constantly out on the road, Clem jumped at the chance. Meeting up and drinking coffee in cafes in Denmark Street with the likes of guitarists Big Jim Sullivan and Jimmy Page, bassist John Paul Jones, and drummers Bobby Graham and Tony Meehan, they were hired to put down the tracks for hundreds of hit records during those crazy days of the 60s and the 70s.

Clem's career included a decade as a member of The Top of the Pops Orchestra. He was approached for tours by numerous stars, as well as being headhunted for the band that would become Led Zeppelin, and also for Paul McCartney’s Wings, both of whom he decided to politely turn down.

During his session days Clem played on recordings for artists as diverse as Cliff Richard, Ike and Tina Turner, Lou Reed, Lulu, Tom Jones, T. Rex and The Who, in the process racking up a mighty 42 No. 1 UK hit singles.

Set against the backdrop of cultural and social development of post-war Britain, Through The Eye Of A Tornado is an affectionate look back over an unparalleled career, with Clem and friends recalling the early days of the British rock and roll scene around Soho, the life of a session musician, and revealing the stories behind the some of the best-known music made in the UK over the past 60 years.