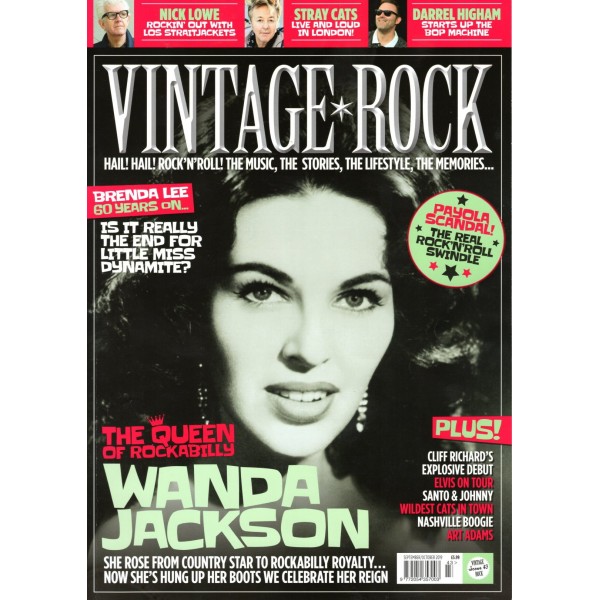 It’s been 60 years since the storming debut album that positioned Cliff Richard as the UK’s own Elvis – with The Drifters in support – we remember a raw classic. It’s also been 60 years since rock’n'roll was hit with it’s first major scandal. Inside we get to the bottom of the infamous ‘Payola Scandal’, the real rock’n'roll swindle in which the scene’s major players had to face the music.

In this issue of Vintage Rock we enter the riotous world of Wanda Jackson. She’s finally just hung up her touring boots this year aged 81, so we decided it was time to honour the Queen Of Rockabilly’s tenure at the top from her incredible rise to glory as both a country and rockabilly star to her greatest ever performances – “It’s been a wild ride!”

Little Miss Dynamite goes out with a bang! We got the exclusive on Brenda Jackson’s retirement too! In our candid interview Brenda remembers her spectacular career, from rubbing shoulders with Elvis to surviving the British Invasion intact.

From villains to heroes, we talk to Memphis Mafia man Jerry Schilling about his days with Elvis and the upcoming ‘Elvis In Concert’ tour with the Royal Philharmonic Orchestra, plus we speak to instrumental hero Johnny Farina, one half of duo Santo & Johnny, about their timeless hit ‘Sleepwalk’.

Bringing things up to date, we chat with Darrel Higham about his new album Bop Machine, we met Nick Lowe, who tells about his new project with masked marauders Los Straitjackets, and we review Stray Cats long-awaited return to the London stage – and what a night it was!

Plenty more besides from fresh talent and rockin’ weekenders to news, reviews and more!