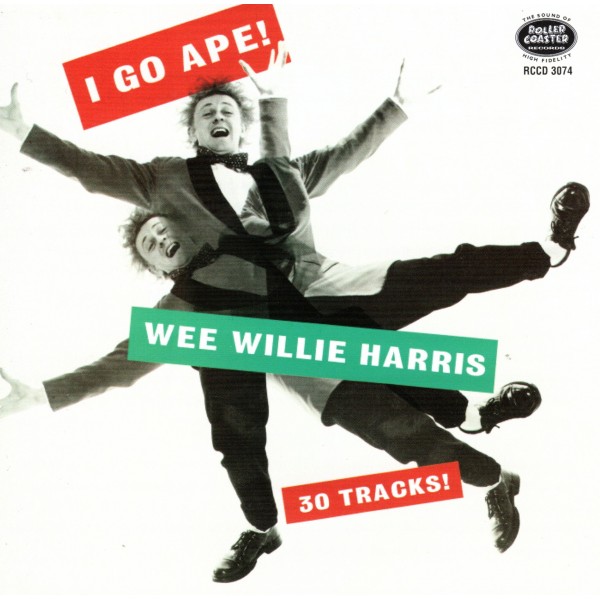 £13.99
Quantity:  - +
Add to wishlist
A 30-track CD featuring the best of Wee Willie Harris, with several previously unissued tracks and released to accompany Rob Finnis's authorised biography of Harris (see separate listing) this is Rockin' With Wee Willie at his best. Sporting a cascading cluster of long pink curls and garish drape jackets with his name emblazoned across the back, or cavorting half-naked in leopard skins, Wee Willie Harris brought a flash of technicolor to grim and grimy post-war Britain. Thrust untrained into the entertainment spotlight, Harris was briefly a star without portfolio in the earliest days of British Rock'n'Roll when he swung to a solid beat while others stumbled and fell. Learning as he went, he quickly developed into a capable entertainer with a lifelong career ahead of him. 'I first saw Wee Willie Harris on the Tonight show with Cliff Michelmore in 1958. He stood up on on his own & played piano & sung, 'Yes it's me & I'm in Love Again'. I thought he was fantastic. He was my kind of act. The next time I saw Wee Willie he was supporting Cliff Richard at Walthamstow Granada in 1959. He came on in a leopard skin leotard & dived in the piano singing 'I Go Ape'. Cliff Richard & the Shadows (then known as the Drifters) were good, but Wee Willie's act was more memorable. He was & still is one of Great Britain's greatest Rock'n'Rollers.' (Chas Hodges) 'Wee Willie Harris, one of the most neglected and underrated stars of the British Rock Scene. He was there at the birth of Rock in the UK. His pink hair was a great gimmick to start with, but although that and the leopard skin gained him international recognition, it tended to divert the attention from his performance as a blues and rock singer of considerable ability. This 'best of' CD will provide the key to unlocking the true qualities of Wee Willie Harris, Rock God! ' (Chas McDevitt)
1: Love Bug Crawl
2: Bloodshot Eyes
3: I Go Ape!
4: Rag Mop
5: Trouble In Mind
6: Rockin' At The 2I's
7: Miss Ann
8: I Grab You
9: I Got My Mojo Working
10: Try Moving Baby
11: Smack Dab In The Middle
12: No Chemise, Please
13: Got A Match?
14: Rosie Lee
15: Back To School Again
16: Wild One
17: Riot In Cell Block #9
18: Frankie & Johnnie
19: Rockin' Chair On The Moon
20: Lollipop Mama
21: Diggin' My Potatoes
22: Rockin' At The 2I's
23: Someone's In The Kitchen With Dinah
24: When I'm Walking
25: No Rice No Peas No Coconut Oil
26: Little Bitty Girl
27: You Must Be Joking
28: Bloodshot Eyes
29: Voodoo Woman
30: Grab You
Please check out our FAQ to find out how to navigate our site, shipping information, and also to read our privacy policy.