Sample - Do the Milkshake 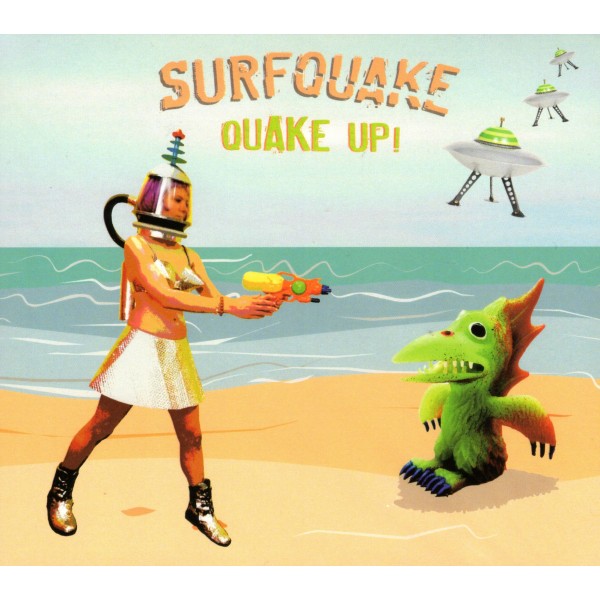 This isn’t a melancholy, sit on the sofa and sip a cup of tea album – It’s a happy, smiley, jump on your ironing board and gyrate in a sixties stylee, kind of thing.

Quake Up! Kicks off with the crashing sound of an amped reverb spring followed by a blistering string of notes from Nelson’s Go-Go Guitar and we’re off on a roadtrip to SURFER JET CITY – a SURFQUAKE original with a nod to the late great Dick Dale.

There’s no time to catch your breath, or the next wave, before the band launch into a splendid upbeat version of the HAWAII FIVE-O TV theme.

But Hey! there’s a lot more than Surf Rock on this album – Space Fantasy and Spaghetti Western is explored and Surfquake get into Spy-fi mode with their retro style covers of the JAMES BOND THEME and DANGER MAN and there’s even an appearance from Inspector Clouseau when A SHOT IN THE DARK gets the Surfquake treatment – that’s Henry Mancini’s theme to the first Pink Panther movie in case you were wondering.

Quake Up! is mainly an instrumental album but we get to hear some singing during the tribal tune JANE OF THE JUNGLE; the freaky DO THE MILKSHAKE; Family Guy Peter Griffin’s favourite SURFIN’ BIRD and a song originally by Manfred Mann 5-4-3-2-1.

Another highlight is a medley of a surf essential coupled with a classic TV theme called WIPE OUT! BATMAN

then we're treated to a few more conventional surf rock tunes with a Hot Rod tune BURNIN’ RUBBER at the albums finishing flag.

Quake Up! has had great reviews in popular music magazines like Vive le Rock, Classic Rock and RnR and tracks have been played on BBC Essex radio and other local radio stations like Colne Radio and Actual Radio.

So, even though these guys – and girl – are from the east coast of England – not known for it’s gnarly waves – they’ve certainly produced a sweet stick of Surf Rock to suck on – tasty stuff!