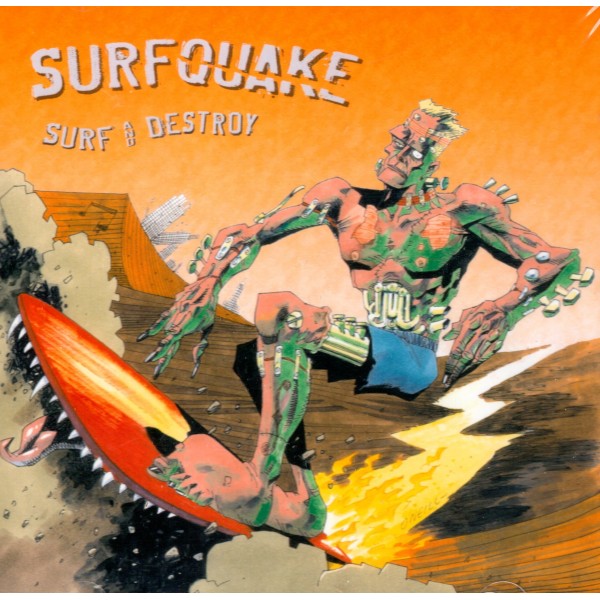 SURFQUAKE are a Surf Rock Band, that'll get you shakin' around to the infectious surf beat before you can say WIPE OUT! Hailing from Colchester, Essex in the UK (admittedly, a town not known for it's 'gnarly waves') this cheeky upbeat 4-piece group put a modern twist on the surf-guitar tradition made famous by the likes of Dick Dale, The Ventures, Link Wray, the Shadows and many others.

Together now for over 10 years, SURFQUAKE have mainly gigged in England but have ventured into mainland Europe on numerous occasions, including 4 tours in Germany / Holland and they’ve also played Music Festivals in France.

Surf and Destroy is their fun packed debut album with 14 tunes - 7 original and 7 covers - clocking in at over 50 minutes.

Stand out tracks include Surfquake's interpretation of Dick Dale's MISIRLOU - they've made it their own with go-go guitar and trumpet exchanging licks during a latin style middle section - and they whip up a sexy melody in the Burlesque tune TAH SOO FA LA LAHS that'll get you hunting in the wardrobe for that feather boa - Ooh la lah!

Tracks have been broadcast on the UK's famous BBC Radio 2 + BBC 6 Radio and BBC Essex Radio as well as lots of other popular Stations.

Their 2nd Album 'Quake Up!' was released on April 26th 2019 and is also available here at Leo's Den.