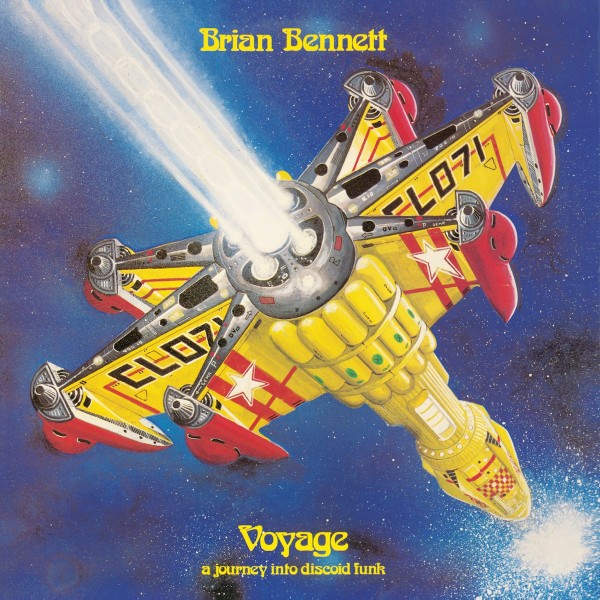 This is thankfully one of those reissues we are desperate for!!
Isle Of Jura’s reissue of the highly sought after ‘Voyage – A Journey Into Discoid Funk’ by Brian Bennett originally released in 1978. A cosmic disco classic completely re-mastered from the original master tapes by Matt Colton. Finally on CD again. Bootlegged badly in the past, re-issued with love now, the sound quality is top notch!

This is one of those albums that has played constantly for the past week and from the first notes of the first track ‘Voyage’ coming on you know you are in for a journey. Albums like this often have one or two good tracks – this whole album is good. Great in fact. ‘Voyage’ is followed by the amazing slow-mo disco of ‘Solstice’ which is so good. An amazing track. The synths, the drums, the funk and groove. ‘Chain Reaction’ follows which feels more traditional in its way until its drops into the most unholy bassline groove. Where on earth did that come from…

Onto the B side where ‘Pendulum Groove’ sets the tone of the space race and is followed by ‘Air Quake’. This one is pretty nuts. I love it. A drum-less arpeggiated intro sets the tone as drum fills fly in and out before the track rolls together all flanging and (sorry) spaced out. ‘Ocean Glide’ leads us out as an arrival down to earth.

Brian himself says, “This was music to complement or invoke visual imagery and I had this idea of the Earth in space, it was around the time of ‘Star Wars’ so this space fantasy thing was very much in vogue. I was also listening to a lot of Brian Eno and I wanted to see if I could write some material along those lines. I was given the go ahead by the label DJM and the concept was a voyage around the Earth. All the drums and synths, including a Prophet 5, were played live and we were experimenting with all the latest sounds and technology”.

The Prophet 5 he mentions really does shine and hearing music of this nature recorded in such a beautiful way is a joy. Add in the melody, playing and sounds and well…its just a wonderful thing. Highly recommended.