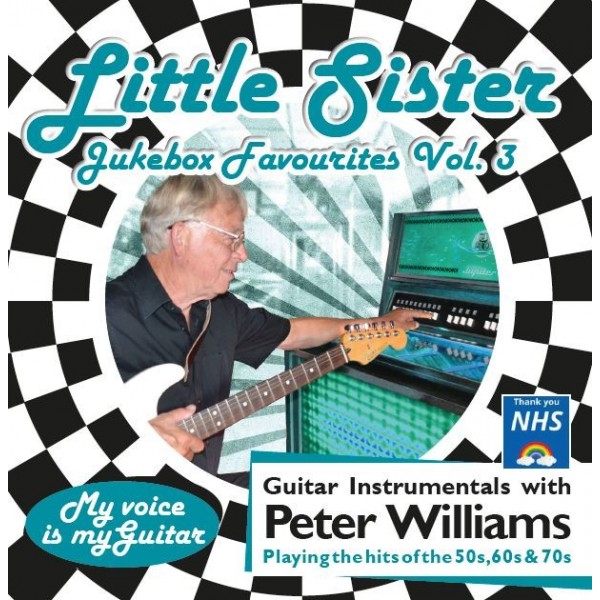 £10.99
Quantity:  - +
Add to wishlist
Here we have the next CD from the much loved Peter Williams. Little Sister is volume 3 in his popular Jukebox Favourites series.
Peter has this to say.....


Hi Everyone and welcome to my 21st Album. By popular demand I have 3 Ricky Nelson tracks on this CD -  "Garden Party", "Travelin' Man" & "Poor Little Fool". I often get asked if I can explain    the lyrics to Garden Party. So here is the explanation.
A Garden Party on October 15 for the 1971 Rock 'n' Roll Revival concert at Madison Square Garden, New York City. It seems the booing was not targeted at Rick, but caused by police during a Rolling Stones song. My old friends: fellow performers at the concert Chuck Berry, Bo Diddley and Bobby Rydell. Yoko: Yoko Ono. Yoko's walrus: John Lennon. Mr. Hughes: George Harrison. (Mr. Hughes) hid in Dylan's shoes: Harrison's planned (but later abandoned) album of Bob Dylan covers. I said hello to Mary Lou, she belongs to me: Nelson's song "Hello Mary Lou", which he played at the concert; also a reference to "She Belongs to Me", a Bob Dylan song covered by Nelson. I sang a song about a Honky-Tonk: The Rolling Stones song "Country Honk", the song that allegedly caused the booing
And it was time to leave: Nelson's subsequent departure. Out stepped Johnny B. Goode: Chuck Berry's song "Johnny B. Goode". Playing guitar like a-ringing a bell: the line in "Johnny B. Goode", "he could play guitar just like a-ringing a bell"

I'd rather drive a truck: Elvis Presley worked for a time as a truck driver, having famously been told after several failed auditions to "stick to truck driving because you're never going to make it as a singer". I hope that clears everything up.

"I Believe" was the first hit song ever to be introduced on TV. Frankie Laine's version spent 18 non consecutive weeks in the UK's Top Singles Chart. My version of "I Pretend" is a tribute to Des O'Connor who sadly passed away this year. The other tracks on this CD are also special to me, but not enough space here to single out each one of them. I must mention the title track - "Little Sister". I heard a new powerful arrangement and I just had to do it. So turn up the volume and rattle the windows with this one. The three titles on here I have covered from The Poni-Tails, The Paris Sisters and The Ronettes, take me back to those very early days as the music we have come to love was now taking shape. Then "Ginny Come Lately" from Brian Hyland was always on the radio. I just had to add that song. it was great fun creating the thunderstorm for the opening to The Cascades song "Rhythm Of The Rain". Having met Johnny Moore many years ago I always wanted to do my favourite song by The Drifters - "Like Sister & Brother".
And now for something special. I want to pay a special tribute here to my daughter, Ailsa Williams, a Senior Sister at Milton Keynes University Hospital and all the NHS staff who have worked tirelessly to fight the Covid 19 virus. I close this CD with my version of OVER THE RAINBOW which is dedicated to all NHS staff everywhere, and a BIG thank you from me.

From Team FRANKIE LAINE (I Believe):

WONDERFUL NEWS ABOUT YOUR NEW CD.  YOU HAVE PICKED EXCELLENT FAVORITES !!!! HOPE IT’S A HUGE SUCCESS !!!!

OUR VERY BEST TO YOU, JIMMY & MARY-JO (FRANKIE LAINE)

Peter’s instrumental of ‘Venus In Blue Jeans.’ I could never have envisaged; Hank Marvin look to your laurels! I think it proves how strong the tune is even in its simplicity. If marketed, it could be a winner. Has Peter downloaded it on line or YouTube? If not he should. My congratulations & thanks to him. Best... M.

Recorded by MARK WYNTER in 1962 reaching No 4 in the UK charts.