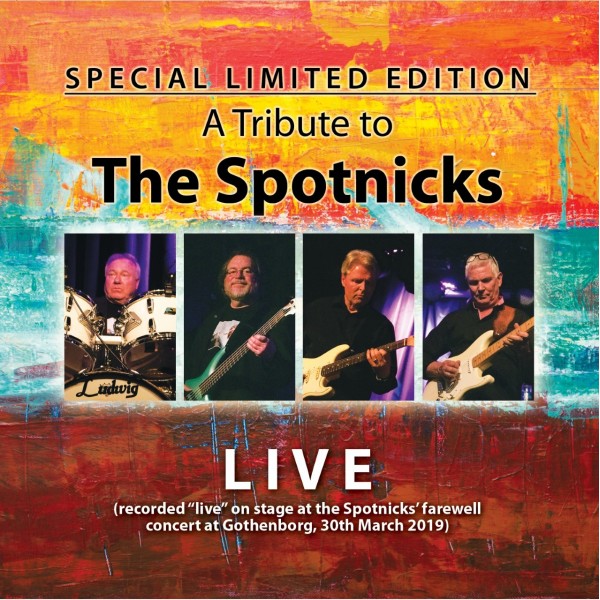 Last batch....
£10.99
Quantity:  - +
Add to wishlist
This is a fabulous limited edition seven track CD, which documents the portion of the live gig featuring the Tribute To The Spotnicks. These guys performed the second set of the night following on from founding members Bo Winberg and Bob Lander (80 and 77 years now) who went into retirement that night.

Tribute To The Spotnicks members who have been in the band since 2008, are Kent Brännlund (guitar), Göran Sanfridsson (bass) and Stephan Möller (drums). These three guys decided to carry on by keeping the spirit and the music of the SPOTNICKS alive, but not by covering and copying the music. They want to pay tribute because there is only one Bo Winberg and one Bob Lander for them who cannot be copied. Fourth member of the band, playing lead guitar, will be Ove Lindell.

Their well-received debut-concert took place on 30th March 2019 too – right after the SPOTNICKS’ final concert. They will perform “live” on stage as well as on CDs. And now let’s take a closer look at these four guys:

STEPHAN MÖLLER (just 69 years young) played drums since the late 50s in many Swedish bands and also for many musicians. He has been a teacher for forty years now and, from 1978 on, played with the SPOTNICKS from time to time, on stage as well as in the studio. He officially belongs to the band since 2008.

KENT BRÄNNLUND, born 1961, started playing accordion and bass at the age of nine and guitar at fourteen. He worked with Swedish dance bands playing in pubs, at parties, weddings, at birthdays etc. Since 1988 he is an educated music teacher at Malmö Music Acadamy. He still works as teacher now. In 2008 he came to the SPOTNICKS, recommended by Stephan Möller

GÖRAN SANFRIDSSON, also born 1961, also played in many  Swedish bands. He is an educated musician (playing cello, double bass, saxophone, accordeon, mandolin, baroque flute, steel guitar, banjo, guitar) and worked as studio musician at the Swedish TV for many years. He is a music teacher since 1982 and came, also recommended by Stephan Möller, to the SPOTNICKS in 2008.

Fortunately their debut concert was professionally recorded and a selection of seven songs from that concert make up this debut-CD, which is a limited edition.

If you could read my mind


Above information courtesy of Karl - Heinz